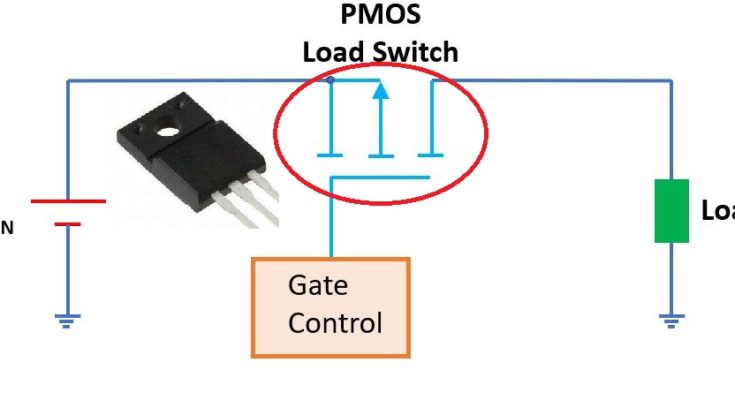 Today, as many electronic devices are becoming mobile and portable, low power consumption is one of the most important requirements. We need carefully select the circuits and components for efficient power management to extend the battery life. In many electronic devices, the loads normally are not always on or off, but working based on a pattern, or duty cycle. A temperature may only need to sample the environment once every minute, while the RF module only needs to turn on when the data is ready for transmission. Therefore, we may want to turn the power off to these modules when they really don’t need the power at the moment and then turn them on when they need. This is when the load switches are used based on the designated duty cycles of their applications. The load switches have been widely used in laptops, smart phones, IoT (Internet of Things) devices and hand-held portable device. The basic form of a load switch is shown below:

The load switch is used to turn on/off the loads. Therefore, its performance is determined by the two distinct periods, the ON time and OFF time. When the load switch is turned off, the key parameter to affect the system is the quiescent current that contributes to the standby power consumption and the turn-off characteristics.

When the load switch is on, it becomes part of the load of the power supply. Therefore, its own characteristics can affect the overall performance of the system, which includes the ON resistance, control topology, gate-to-source voltage, inrush current and turn on speed, etc.

The on resistance of a MOSFET is the resistance of the channel between the drain and source of the MOSFET when it is in conducting operation. The higher the on resistance, the more power loss it causes. According to semiconductor physics, the on resistance of MOSFETs is decided by the dimensions of the device channel and the type of the material forming the channel. Traditionally, P-channel MOSFET cannot reach the same RDS(on)  performance of an N-channel MOSFET with the same die size. The majority carriers in an N-channel MOSFET are electrons, whose mobility is approximately 2 to 3 times higher than that of a P-channel. To achieve the same level of RDS(on), the P-channel die must be made 2 to 3 times larger than the N-channel. With the larger die size, we can gain the advantages of lower thermal resistance and higher current rating for the P-channel MOSFET, but lose dynamic performance due to the larger gate capacitance. Generally, we make selections between the P-channel and N-channel based on the specific requirements of applications.

For low-frequency applications, the conduction loss caused by the load switch is the primary concern. Therefore, RDS(on)  is the only requirement matters the performance. So we can select P-channel MOSFET over N-channel MOSFET. The P-channel MOSFET will have larger chip size to provide a low RDS(on). Since the working frequency is low, e.g., from 10 to 50k Hz, the loss in dynamic performance due to the dimensions of device structure is not significant. On the other side, we gain advantages of better thermal performance and higher current rating.

Other than the distinct separation between the low- and high- frequency applications, we have the popular mobile applications, which have strict requirements for the size. Normally, such applications demand a power less than 10W. For such applications, the design goal is to achieve high efficiency while keeping the size acceptable according to the designs. Fast switching frequencies can help reduce the size of the inductors. Moreover, we can use the P-channel MOSFET that eliminates the need for extra gate driver circuitry to further save space.

According to theory of MOSFET, the relationship between the on resistance RDS(on)  and the gate-to-source voltage VGS is

When the load switch is turned on, its dynamic characteristics affect the overall performance of the system, such as the inrush current and turn-on speed. The inrush current is caused by the capacitive loading characteristics of the load when the power is applied to it. The capacitive load starts to charge and it appears to have no resistance. The result is a huge current spike and corresponding voltage sag on the power supply output. The slew rate of the voltage being applied to the input capacitance and the capacitance itself determines the inrush current:

This figure shows the effect of inrush current caused by a 100µF load capacitance. Without any slew rate control, the inrush current peaks at about 6.88A and forces the voltage rail to drop from 3.3V down to 960mV. (By Texas Instruments)

The effect of the inrush current can be mitigated by specifying a settling time during which the system is kept in a reset state until the voltage stabilizes. Different load switches have different methods for reducing the slew rate. The following circuit uses an external resistor R1 an capacitor C1 to reduce the turn on speed of the pass transistor.

In the circuit, the R1 and R2 form a voltage divider to determine the gate voltage and they can be determined by using the following equation:

VSG,MAX can be found in the datasheet. To calculate R1, we can use a value between 1k and 10kΩ for R2. The C1 combining with R1 determines the turn-on speed of the pass transistor and it can be calculated. The selection of R1, R2 and C1 is critical to the performance of the load switch. C1 must be much larger than the gate capacitance of the pass transistor to be able to control the slew rate.

Where the plateau voltage VPL is defined as:

As important as the inrush current to the performance of load switches, the turn-on speed is one of the key parameters to be considered in selection of the right load switch for your applications. Fast turn-on speed can cause inrush current. A slower turn-on speed is helpful for reducing the input current spikes but may cause other problems. As shown in the above figure, MOSFETS operates at different temperatures show different characteristics but all the transfer curves for different temperatures will intersect at a specific VGS, which is called the inflection point. Above the inflection point, RDS(on) increases as temperature increases, so the current decreases. For parallel power distribution, the current decreases in one branch will cause the current increases in less resistive branch. Therefore, the final result is a balanced current distribution among all the loads. Below the inflection point, the MOSFET behaves as a BJT (Bipolar Junction Transistor) that conducts higher current as it’s heated up and the current continuously increases as temperature rises. This is the situation normally leads to the thermal runaway of the device. The selection of the appropriate gate-to-source voltage is very important to keep the load switch from thermal runaway.

Texas Instruments load switches feature a controlled rise time, and for some products, the rise time can be adjusted. The rise time of the load switches can be increased by adding an external capacitor between the CT pin and GND pin as shown below in the application circuit of TPS22965. 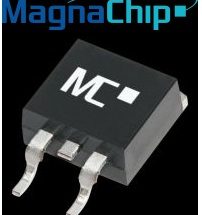