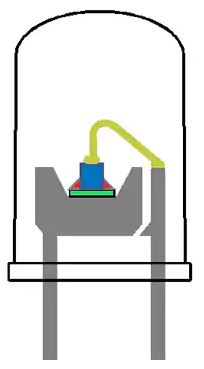 The wire bonds (gold) that connect the LED die (blue) to the leads can be fractured by the stresses of thermal expansion. Moisture or caustic chemicals absorbed by the epoxy envelope can corrode the leads (gray).

The physical mechanism of failure mode LED lamp is a system composed of multiple modules. The failure of each component will cause the failure of LED lamps. From light-emitting chips to LED lamps, there are nearly thirty failure modes, as shown in Table 1. Here, the LED is divided into two parts, the chip and the external package from the composition structure. Then, LED failure modes and physical mechanisms are also divided into chip failure and package failure to discuss.

The factors that cause LED chip failure mainly include: electrostatic discharge, current and temperature.
Electrostatic discharge (ESD) can release instantaneous ultra-high voltage, causing great harm to LED chips. LED chip failure caused by ESD is divided into two modes: soft failure and hard failure. The high voltage / current caused by static electricity causes the LED chip to short-circuit into a hard failure mode. The reason for the short circuit of the LED chip is that an excessively high voltage ruptures the electrolyte, or an excessively high current density is a current path generated in the chip.
A slightly lower voltage / current from electrostatic discharge will cause soft failure of the LED chip. Soft failure is usually accompanied by a reduction in the reverse leakage current of the chip, which may be caused by the high reverse current making part of the leakage current path disappears. Compared with vertical LED chips, static electricity is more harmful to horizontal LED chips. Because the electrodes of the horizontal LED chip are on the same side of the chip, the instantaneous high voltage generated by static electricity is more likely to short-circuit the electrodes on the chip, thereby causing the LED chip to fail.

High current will also bring about the failure of the LED chip: on the one hand, large current will bring a relatively high junction temperature; on the other hand, electrons with high kinetic energy entering the PN junction will break the Mg-H bond and Ga-N bond.
The fracture of the Mg-H bond will further activate the p-layer carriers, so that the LED chip has a stage of rising optical power at the beginning of aging, and the fracture of the Ga-N bond will form a nitrogen vacancy. Nitrogen vacancies increase the possibility of non-radiative recombination, which explains the attenuation of the optical power of the device. The formation of nitrogen vacancies is a very long process when reaching equilibrium, which is the main reason for the slow aging of LED chips.
At the same time, high current will bring about current crowding inside the LED chip. The greater the defect density in the LED chip, the more serious the current crowding phenomenon. Excessive current density will cause electromigration of the metal, making the LED chip ineffective. In addition, under the double action of current and temperature, InGaN light-emitting diodes will also have very unstable Mg-H2 composites in the effectively doped p-layer.
The effect of temperature on the LED chip is mainly to reduce the internal quantum efficiency and shorten the life of the LED chip. This is because the internal quantum efficiency is a function of temperature. The higher the temperature, the lower the internal quantum efficiency is. At the same time, the aging effect of temperature on the material will make the Ohmic contact and the performance of the material inside the LED chip worse. In addition, the high junction temperature makes the temperature distribution in the chip uneven, causing strain, which reduces the internal quantum efficiency and chip reliability. If the thermal stress is large enough, the LED chip may be broken.

Through the experimental research on high humidity environment, it is found that the intrusion of moisture not only makes the LED light efficiency drop, but also may lead to the catastrophic failure of the LED. The accelerated experimental study of high temperature and high humidity reliability at 85 ° C / 85% RH found that moisture plays an important role in the formation of delamination defects. The delamination phenomenon causes the LED light efficiency to drop, resulting in different chip surface roughness as well as different failure modes.