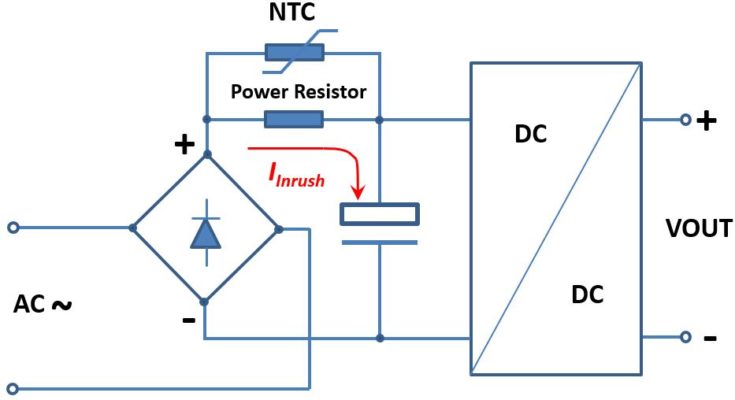 The inrush current of the switching power supply refers to the peak current flowing into the power supply equipment at the instant the power is turned on as shown in the below figure. Since the input filter capacitor of the charger quickly charges, the peak current is much larger than the steady-state input current. The power supply should limit the surge levels that AC switches, rectifier bridges, fuses, and EMI filter devices can withstand. Switching the loop repeatedly, the AC input voltage should not damage the power supply or causes the fuse to blow.

When we designing low-power switching mode power supplies (e.g., maximum a few watts), directly use power resistor to limit the inrush current can be a cost-efficient solution. This solution is not power-efficient because the resistance is almost constant no matter it’s in the startup period or during the working phase. Therefore it imposes constant power dissipation throughout the operation of the power supply. Considering the scale of output power, this overhead waste is not significant.

Using a resistor to limit the startup current in power supplies with higher power rating than a few watts is not efficient. The resistor will dissipate power as long as the system is power on, even though it is only needed when the system is starting up. Therefore it is necessary to remove the resistor immediately after the startup is completed. There are many ways to realize this function, such as place a relay, an NTC thermistor or a MOSFET in parallel to the power resistor as shown in below figures.

NTC thermistor and common power resistor are connected in parallel to limit the inrush current.

A series fixed value resistor is used with the thyristor to limit the input surge current.

When power is turned on, Vs is cut off, the current passes R1, R1 plays a current limiting role, reaches a certain condition, VS is turned on, and R1 is opened. The efficiency loss is greatly reduced.

The basic principle of the circuit work is: Because the input terminal of the DC-DC switching power supply is connected with a capacitive filter circuit, when the power is turned on, the input capacitor needs to be charged at the moment, so a large inrush current occurs instantly The drain source of the MOSFET (T) intervening on the ground line of the bus input is not conductive. With the delay circuit composed of two resistors, a capacitor and a Zener diode, the gate of the MOSFET (T) is powered up. The drain-source of the MOSFET (T) is gradually turned on, thereby effectively reducing the inrush current value generated by the capacitive filter circuit at the input end when the power is turned on. When the circuit enters a stable working state, its drain source is always on. Because the actual switching power supply product design has different inrush current suppression, different inrush current suppression results can be obtained by adjusting the specific parameters of filter capacitor.

The ambient temperature is very low, so the resistance of the NTC thermistor will be so high that it adversely limits the supply current to be less than the minimum current needed for startup. In this case, the PTC thermistor is preferable.

In a system that certain devices must be switched on and off frequently. In such situations, it creates multiple instances of inrush current peaks. The time between two instances is very short and it imposes risks to the system if the NTC thermistor is used. NTC thermistor needs time to cool down and the resistance will be very low if it’s not cooled down sufficiently. When a restart is requested and the NTC is in its low-resistance state, excessive inrush current will be encountered.

In the cases when a short circuit fault is developed, the system current will drastically increase, thus the NTC thermistor will be quickly heated up. When the NTC thermistor has lower resistance, it allows even more current to speed up the short-circuit damage.

In above cases, a PTC thermistor is preferred to be used for inrush current limiting.

With the advantages described above, a PC thermistor costs more than an NTC thermistor. Also, the PTC-based current limiting circuit requires the bypassing mechanism to remove the PTC from the supply loop when it heats up. As shown in the above diagram, a relay is used to bypass the PTC thermistor when it detects the supply current drops below the threshold. Even with the drawbacks of high cost, the PTC is still preferred in many applications, such as DC motors and solenoids because of PTC thermistor’s self-protecting characteristics that it increases its resistance when being heated up by excessive current.