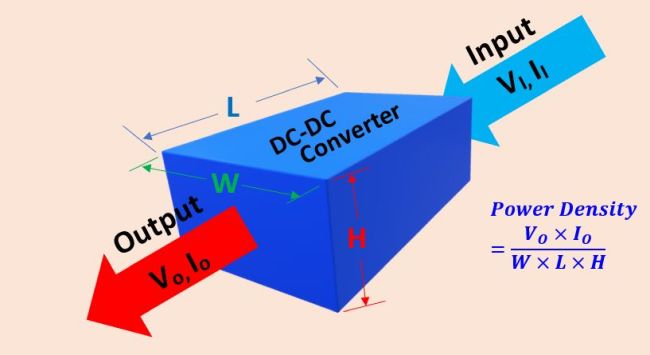 Market-driven requirements for high current, high power and small-size products are in turn driving the engineering designs for new power supply products. The primary design metrics or specifications translated from the vague marketing requirements are the voltage, current and dimensions. From these parameters, we intuitively draw an impression that the smaller the size of the product is, the greater the output power density can be. This vague concept actually can draw an exact math concept:

The power density of a DC-DC converter is defined as the continuous output power the converter can deliver in the worst-case scenario. The overall power density is often affected by many factors, such as ambient temperature, operating temperature, altitude and lifetime.

Of course, there are many other requirements, such as output AC ripples, temperatures, transient response, etc., but the power density concept is the primary requirements to shape the engineering designs of modern power supplies. It has been reported that the industry has followed the trend towards high power and miniaturization for years and clearly the trend is continuing. According to J. Morroni and P. Shenoy of Texas Instruments, the reduction in DC/DC converter size for 6A and 10A power modules have been in pace with every single new technology generation.

The inductors in the switch mode converters store and release energy cyclically. As shown by the following equation, the higher switching frequencies the inductor works at, the lower inductance is needed which means smaller inductors.

The size shrinkage enabled by higher switching frequencies is better illustrated by the above figure. The other benefits brought by shrunk size include the increased control loop bandwidth for better transient response with less output capacitance.

While increasing the switching frequency results in small device size, the higher frequencies also cause switching loss and heat dissipation for performance derating.

For a high side MOSFET switch, the power dissipation of the switch during the transitions from OFF State to ON State and vice versa.

The switching begins when the VGS of the high-side MOSFET is greater than the threshold voltage VTH and the current begins to flow to charge the input capacitance CISS. The energy stored in the output inductor is calculated using equation (3).

The power loss due to switching is calculated by the following equation:

There is another type of loss called gate charge loss that is related to the gate charging process of the MOSFET. The gate capacitance is formed by the metallic deposition layer and the conduction channel which are insulated by a layer of SiO2.

The loss caused by the gate charging is more significant at higher switching frequencies.

When we are putting much effort in reducing the power losses, we cannot ignore another key performance that can be the limiting parameter for meeting the ultimate design goal. That’s the thermal management. The losses are transferred into heat and the heat accumulation inside the device must be removed as fast as possible to keep the device performing well. The removed heat goes to the ambient. The model of device thermal resistance show the thermal behavior of a semiconductor device is similar to that defined by Ohm’s Law. Therefore, we have the thermal resistance parameters listed in the device datasheets, such as RθJA (°C/W) – junction-to-ambient thermal resistance and RθJC (°C/W) – Junction-to-Case thermal resistance. These parameters determine the thermal behavior of the devices and they are dependent on the packaging design. The goal of thermal optimization by packaging, PCB, heatsink, etc. is to slow down the temperature rise caused by the power losses, such as conduction loss, switching loss and gate charge loss, etc.

Of all the consideration discussed, the efficiency should be the primary factor in power density optimization. When the power density is increased, the rest we must do is to innovate the packaging for better thermal performance and optimization for design parameters and component selection. The items on the checklist of the design project must include: