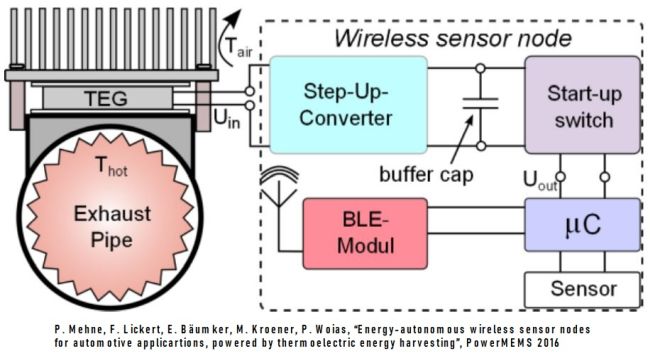 As the awareness of environmental protection keeps growing, great amount of funding has been invested in the field of renewable energies and the industries are picking up the trend by moving to the renewable sources. The outcome is very promising. According to the Center for Climate and Energy Solutions (C2ES), renewable energy in the United States gain 100% increase during from 2000 to 2018 and the renewable sources accounted for more than 17% of the net U.S. electricity generation in 2018. C2ES also predicts that solar power generation will increase from 11% of total renewable generation in the U.S. in 2017 to 48% by 2050. Also, due to stricter government policies and regulations, the drive for renewables and alternatives will continue existing. When we are developing new technologies for alternative energy sources, the research in collecting energies, technologies of energy harvesting or called energy scavenging, from wasted sources have gained more and more attention. The sources for harvesting energies include solar, hydropower, thermoelectric, vibration, electromagnetic, etc. types. Energy harvesting is a great way leading to a more sustainable energy usage and it is proven to be an environmentally friendly method to use natural resources. As the amount of energy generated by energy harvesting keeps growing, more and more natural resources will be protected.

There are many sources for energy harvesting and the thermoelectric energy is a very convenient one of them. We have known the fact that thermal energy transfers from high temperature point to the point with lower temperature. The amount of energy transfer is determined by how much the difference between the temperatures. We can hardly find all objects surrounding us are equally warm or cold. Whenever there is a temperature gradient exists, thermal energy will transfer from high to low temperatures. Thermoelectric devices for energy harvesting are made of semiconductors. They are referred as TEG (Thermoelectric Generator) that can convert thermal energy into electricity based on Seebeck effect and Peltier effect or Thompson effect, which has been known for two centuries. The thermoelectric devices are often used as a heat pump for cooling, known as Peltier coolers. With the temperature gradient between the hot and cold plates of the TEG, the charge carriers, electrons in the n-type material and holes in the p-type material move from the hot plat to the cold plate. The separation of charged carriers results in an electrostatic potential in the device. The Seebeck effect is very weak in metals with the Seebeck coefficient less than 10 μV/K. In semiconductors, like Bi2Te3, Sb2Te3, PbTe, SnTe and SiGe, the Seebeck coefficient can be more than 200 μV/K. These semiconductor materials can be used to for practical thermoelectric generation. A TEG device typically is built into a sandwich structure with an array of n-type and p-type semiconductor pillars which are pellets of either bismuth telluride or antimony telluride. The pillars are strapped together to create a series electrical connection and a parallel thermal connection. The top and bottom of the module typically is made of aluminum oxide ceramic to provide electrical insulation and good thermal conductivity.

The power generation using TEG has been made practical with highly efficient semiconductor materials and optimal designs. The following picture shows the hardware prototype of H2P (Heat to Power) system (TEG Model SP 1848-27145, CPU type Intel Xeon E5-2650 V3) which utilizes water circulation to improve the thermoelectric generation efficiency. The warm circulation loop is filled with yellow coolant and the cold circulation loop is filled with blue coolant. The measured open-circuit voltage vs. temperature difference is shown in below figure. It shows the open-circuit voltage increases linearly with the temperature difference between the warm coolant and cold coolant. Also, the voltage is corelated with the coolant flow rate. This prototype of TEG heat energy harvesting is a working example that is similar to other TEG deployments on vehicle exhaust pipes and radiators.

The ICE (Internal combustion engine) is known to be inefficient in converting the chemical energy into mechanical energy. The large portion of the wasted energy is merely dissipated as heat in the exhaust and coolant systems. There have been technologies for improving the engine efficiency as well as technologies for recovery of the waste energy of the car engines. TEG (Thermoelectric Generator) is one of the most promising technologies. TEG is solid-state, passive, silent, scalable, durable without moving parts. These attributes make TEG an ideal candidate for vehicular applications. When used in the exhaust pipe, the TEG materials must be rated for high temperature. The high temperature difference int eh exhaust pipe means more power and higher efficiency can be achieved with TEGs. Major car makers, like BMW, Ford, Renault, and Honda have studied technologies for heat recovery in exhaust system. Their designs are very similar. Typically, the TEGs are mounted on the surface that is rectangular for easy installation and are cooled by engine coolant. The following figures show the Honda system that uses a simple design of a thin flat rectangular box that allows the TEGs to be mounted on the top and bottom surfaces. The Honda system uses liquid coolant. The whole system consists of 32 TEGs measured at 30 mm x 30 mm each. These TEGs can generate approximately 500 W. With these much heat recovery, the fuel consumption is claimed to be reduced by 3%.

Many applications of TEG for thermal energy harvesting on the vehicle are realized on exhaust pipes because exhaust pipes deliver extremely hot exhaust gas to the ambient air. Like the experiment done by Honda, lots of power can be generated from the exhaust pipes by TEGs. But, the exhaust pipe installation of TEGs have a disadvantage that the heat harvesting may interfere with the emission control efficiency, which highly depends on the temperatures at which the catalysts must be maintained to function optimally. Therefore, sometimes, the TEGs are installed downstream of the catalyst as a tradeoff. AS a result, the TEG efficiency is greatly sacrificed. A good alternative source of waster heat in the engine compartment is the radiator. The reconfigurable TEG thermal energy harvesting system mounted on the radiator is shown in the following block diagram.

The TEG system for powering the BLE wireless sensor node (WSN) has shown stable output over several 1000 km of test drive distance. One disadvantage is that the WSN typically turns on within 15 minutes after the start of the car engine. The long delay for startup is due to the high energy demand of the BLE module in use. This issue can be resolved by using ultra-low power wireless communication modules.

If you want to know more about green energy sources, please visit SaveOnEnergy.