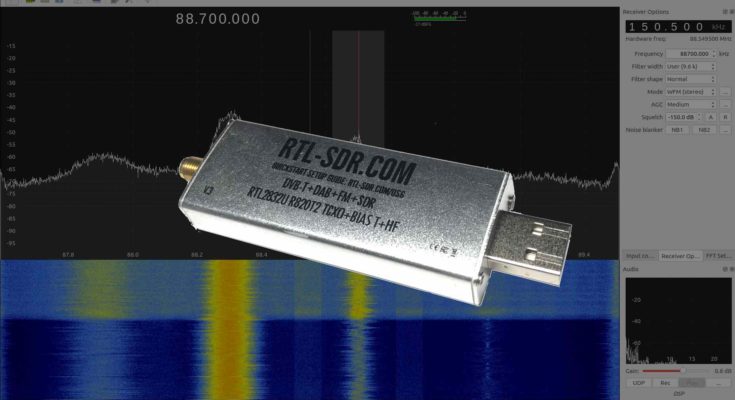 To the average hobbyist, RF electronics is often relegated to the realm of magic and mystery. You plonk down a transceiver and somehow it beams data hundreds of meters away.
Although the airwaves are alive with billions of packets whooshing by at the speed of light, they are completely invisible to our eyes. The ability to see the unseen world of RF often requires specialized equipment such as spectrum analyzers and software-defined radios. Equipment like that can cost hundreds or thousands of dollars. But it doesn’t have to.

Enter the world of RTL-SDR V3, the USB stick that combines spectrum analyzer and software-defined radio to unravel the mysteries of the RF world. By leveraging your computer’s CPU power, the RTL-SDR opens up a limitless trove of possibilities for RF exploration. Boy, this sounds expensive, huh? How does $30 sound? Unbelievable? That’s what I thought, too. Before we get too excited here, let’s see what RTL-SDR is and what it can do.

What is an SDR, Anyways?

All you really need to know is that an SDR, or Software-Defined Radio, is a device that allows your computer to pick up radio signals. It doesn’t have as much fancy circuitry as a typical radio receiver because nearly everything–save for some magical RF goodness–is taken care of by software on your PC. This makes them especially versatile compared to their “hardware-defined” counterparts.

A Brief History of RTL-SDR

Here’s a fun fact: the very first RTL-SDR wasn’t even meant to be an SDR at all. In fact, it was a USB dongle for watching over-the-air television on your computer. It turns out that the RTL2832U chip powering the dongle (That’s where the RTL part of its name comes from) is able to feed the computer raw data from its tuner if you give it the right commands. What’s more, thanks to mass-production, these dongles can be produced very cheaply. As you might imagine, they exploded in popularity with the RF hobbyist community, and the rest is history.
Nowadays, there are many different versions of the RTL-SDR floating around in various forms, functionalities, and costs. But the version I’ll be looking at today is the official RTL-SDR V3, sold by rtl-sdr-blog.

What’s in the Box

I bought the RTL-SDR V3 kit from rtl-sdr-blog’s eBay site here, which, along with the RTL-SDR itself, also includes a veritable cornucopia of accessories to get you started. You’ll get:

Did I mention that all this is only $30 delivered? Although there are slightly cheaper options out there that come with just the SDR, there’s no reason to not pay a few more dollars and get the full kit, especially if you’re just starting out. Otherwise, you’ll need to bring (or make) your own antennas and cables, which are absolutely essential for the RTL-SDR V3.

Right out of the box, the RTL-SDR V3 feels nice and solid in the hand, thanks to its sturdy aluminum construction. It closely resembles a USB Wifi adapter with an external antenna. It arrived in a protective anti static bag with plastic caps over its ports. Nice attention to detail!

Helpfully printed on the top of the unit is a link to a quick start guide, where I was able to find a tutorial for installing the software required to use the RTL-SDR V3. In about half an hour, everything was installed and ready to run.

The versatility of SDR really shows itself when you decide to start switching between broadcast bands. With the press of a button, you can switch between FM and AM demodulation, or even tweak the tuning width to isolate certain frequencies.

So far, I’ve been able to tune in on all my favorite FM radio stations, and even found a few more that my car stereo couldn’t! I’ve also picked up shortwave and AM using direct-sampling mode, although it wouldn’t hurt to have some more amplification on the low end (Bring your own LNA!). Up around ~120 MHz, you’ll be able to hear radio communications from aircraft flying overhead, and NOAA weather radio at ~162 MHz. Some “local” sources of RF to look at include remote-control toys at 27 or 49 MHz and walkie-talkies at ~462 MHz. In short, there’s a lot in the RF world to explore and experiment with.

Although the RTL-SDR V3 has proven reliable so far on all my computer setups, you’ll get the best performance from a laptop running on battery power. Lots of modern power supplies emit RF at a few MHz, which might affect the cleanliness of your signal, especially on lower frequencies.

The unit begins to warm after extended use, but it’s usually not too hot to touch, provided it’s properly ventilated. So far, I haven’t noticed any stability issues related to heat, thanks to its on-board temperature-compensated oscillator. The software is pretty CPU-intensive, so you might find that the SDR isn’t the only thing getting a bit warm!

What Can it Do?

With the RTL-SDR V3, you’ll love all the things it can do:

What Can’t it Do?

Unfortunately, all good things have a few strings attached. Fortunately for the RTL-SDR V3 they probably aren’t deal-breakers, especially for its price:

The RTL-SDR V3 is definitely a good choice for anyone who wants to give themselves (or their computers) RF-vision superpowers! Especially for those wanting to test the waters of RF, this SDR is a low-risk, high-reward route to learning more about the RF technology. It’ll surely give you a new perspective on how much information is being sent through the air. Just don’t let all that new-found power go to your head!

If you can’t get enough of the RTL-SDR V3, stay tuned (pun totally intended!), because a teardown is on its way! Curious about what makes the RTL-SDR V3 tick? I’ll take mine apart so you don’t have to!