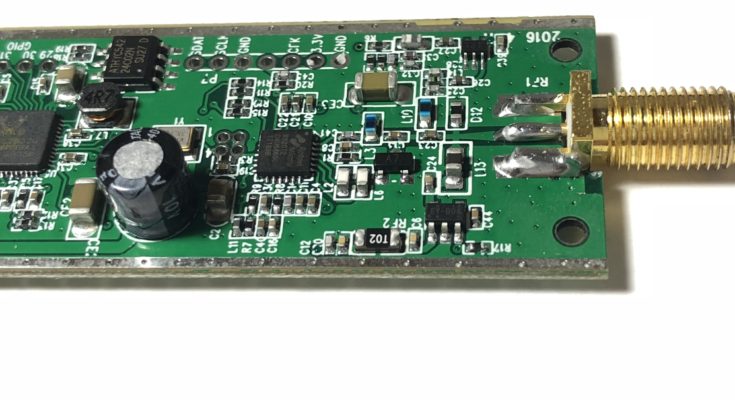 It’s always fun to take things apart and see what we can learn from them. Or, just to look at the cool circuitry inside. If you want to learn more about the RTL-SDR V3, I also reviewed its features and functionality when it was still in one piece.

Note: I don’t recommend taking apart your RTL-SDR unless it’s absolutely necessary. There’s a silicone thermal pad on the bottom that contacts the board and the case, and it’s best not to disturb it. I did this so you don’t have to!

The teardown process is pretty straightforward; just four Phillips head screws and a nut around the antenna connector hold the endcaps to the body of the device. Then the PCB slides out of the casing. Simple, huh?

The rest of the casing is made from one solid chunk of extruded aluminum, which is grounded for RF shielding. It also serves as the main route for heat dissipation. Along with the big gray thermal pad on the bottom of the PCB, they clearly had thermal management in mind. The unit will feel hotter to the touch when running; that just means the cooling setup is doing its job, instead of trapping the heat inside.

Before we dive headlong into the analysis, let’s talk about how the RTL-SDR (and SDRs in general) works, from an operational standpoint.

A software-defined radio, or SDR for short, is essentially a radio that is to some degree implemented in software. That’s the SDR part of RTL-SDR V3. It’s basically a box that contains all the radio bits that are too hard or impossible to simulate on your computer, like the pre-amplifier and tuner. It’ll then digitize the signal and transfer it at high speed to your computer to decode. This digitization is about the only processing an SDR has to do, which means that the chips running an SDR don’t have to be super powerful (read: expensive).

Essentially, it’s a half-built radio. But you’re not getting ripped off here; because so much of an SDR is software, it’s much more flexible than your typical hardware-defined radio.

The radio in your car stereo is fully hardware, but it only knows how to decode FM and AM broadcasts. Likewise, your garage door opener is specifically designed to pick up signals from your remote. You won’t be able to listen to your favorite radio station on your garage door opener! Since an SDR does all the decoding virtually, it can decode FM and AM audio, digital communications, and pretty much any other form of data carried over radio waves!

There’s no free lunch, and there are some drawbacks to the SDR approach. While versatility makes it a jack of all trades, it’s really an ace of none. Most SDRs have a wide tuning range, meaning performance for any specific frequency will be inferior to that of a comparable purpose-built hardware radio. Additionally, an SDR requires heavy computation to operate, which leads to increased heat and power consumption. For these reasons, it’s usually not recommended to incorporate SDRs into consumer electronics, outside of specialized applications.

Nevertheless, SDRs still have their merit in development work. An SDR can serve as a handy instrument that can be adapted to a wide range of protocols and bands. Especially in IoT applications where multiple protocols exist, having the flexibility to quickly and easily switch radio modes can allow developers to be more productive. When a new wireless standard rolls around, all you need to do is change the software!

Back to the RTL-SDR

It’s time to meet the cast of this show:

To better understand how the RTL-SDR works, let’s follow the signal from the signal input, all the way to your computer.

After a matching network to tune the impedance of the RF line, the first stop is the R280T2, which is essentially an RF front-end in a single chip. It amplifies the incoming signal, filters out signals outside of its tuning frequency, and down-converts the result into a lower frequency. This makes the RTL-SDR a Superheterodyne Receiver, which is a fancy way of saying that it uses frequency conversion to work on a lower frequency signal.

This is all thanks to a special RF component, called the Mixer. How this works may as well be RF magic for our intents and purposes, but there’s plenty to read up on in the Wikipedia article. The short of the matter is that one thing the mixer can do is “subtract” frequency from the input signal, which results in an Intermediate Frequency (IF) signal containing the same information as original signal, but at a lower frequency.

This is huge because all the rest of your components only have to work at this lower frequency. In theory, the RTL2832U can sample a 1.5 GHz signal about as easily as it can sample a 24 MHz one. (Of course, bandwidth is another consideration.) This is some pretty cool RF magic!

This magic is only possible thanks to the Local Oscillator (LO), which is generated on the RTL-SDR by the TCXO and a special circuit known as a Phase-Locked Loop (PLL) inside the RT820T2. The TCXO provides a stable reference frequency and the PLL synchronizes to it, generating a higher frequency signal that remains in-step with the accurate reference (“phase-locked”).

The PLL can then be adjusted to provide the desired LO frequency. The TCXO must be accurate in order for the PLL to be effective. Otherwise, the signal tuning can drift away from the target frequency, or the PLL can lose its lock. Fortunately, the TCXO in the RTL-SDR V3 touts a 1 ppm (part per million) accuracy over a wide range of temperatures, which is significantly better than most non-TCXO crystal oscillators.

Although the R820T2 can only tune down to 24 MHz, the RTL-SDR V3 can bypass it in direct-sampling mode. To do this, the RTL-SDR V3 has a split in its signal path, through which RF signals are directly fed into the IF input.

No matter the path, the IF signal enters the RTL2832U, where the Analog-to-Digital Converter (ADC) samples the signal and streams it over USB. All analog signals stop at this chip; it’s all digital here on out. Although no publicly-accessible datasheet exists (It’s behind an NDA), we can tell from the specifications of the RTL-SDR itself that the RTL2832U is a pretty beefy chip; it’s able to achieve up to 2.4 million samples per second! Its performance makes sense when you remember it used to be a video receiver.

Your computer then uses all sorts of mathematical operations to filter, convert, and demodulate the signal into the desired output format. This could be anything from music and video, to raw numerical data. All this is thanks to Digital Signal Processing (DSP)!

To wrap up, here are some key things we’ve learned about the RTL-SDR V3: