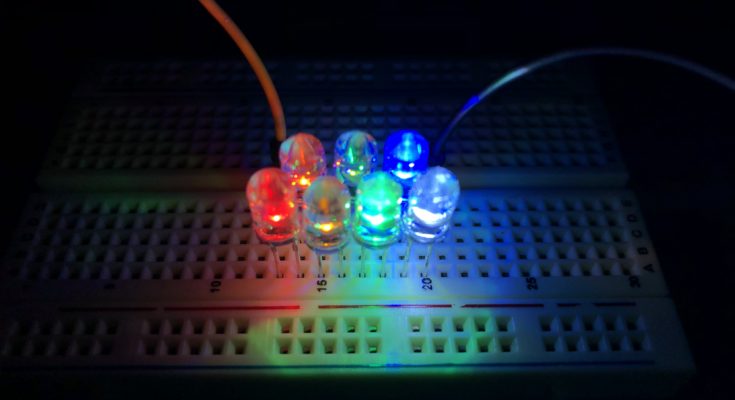 LEDs (Light-Emitting Diodes) light up our modern world. Everything from status indicators, to displays, and even…well, lighting, uses LEDs of all colors, shapes, and sizes. As we’ve explored in a previous experiment, one thing that determines an LED’s color is the material properties of the silicon it’s made of. In this lab, we’ll explore these properties and find out how they relate to the LED’s color.

Light-Emitting Diodes, as their name suggests, are just like regular diodes in that current can flow through them in only one direction. This is because they’re made up of two different kinds of semiconductors pressed together. We’ll call them N-Type and P-Type. N-Type materials are negatively-charged because they have extra electrons, while P-Types are positively-charged because they are missing electrons (they have “holes”). When current is applied, electrons flow from N-Type to P-Type and get attracted to the holes. These flowing electrons have a pretty high energy, and when they get “captured” by the holes, which are at a lower energy level, they have to give up some of that energy. In LEDs, that energy happens to be released in the form of light. The bigger the energy difference (known as the band gap), the more energy the electron has to release, and the shorter the wavelength of light [1].

Imagine you’re on a ladder dropping tennis balls into a bucket of water (please be careful). The higher up you are on the ladder, the bigger the “splash” you’ll make. This is essentially what determines LED color. With red LEDs (with low-energy, long wavelength light) you’re dropping tennis balls from the first couple of rungs. With blue LEDs (with high-energy, short wavelength light), you’re dropping them from near the top (again, please be safe up there). The height you drop the tennis balls at is the band gap.

The voltage we apply to get an LED to glow is proportional to the energy level of the electrons flowing through it. By measuring this voltage, we can estimate how much energy the electrons are dropping as they pass through. (It’s not exact, but pretty close)

This is a special experiment designed to accommodate labs with limited equipment. We’ve created two versions of this experiment based on available equipment/supplies in your lab:

Although the procedures and materials are different, the end result is exactly the same. However, one might be easier depending on the equipment available in your lab.

Along with the usual colors of LEDs, I also tested infrared and white LEDs, and a regular 1N914 small-signal diode. Notice how the forward voltage for a normal diode is much, much less than for an LED.

As we explored in a previous lab, white LEDs are actually blue LEDs with a yellow phosphor. The fact that its forward voltage is very similar to that of the blue LED tells us that this particular white LED was made this way.

Here’s a table of common LED colors and their (approximate) wavelengths [2]:

Did you notice how LEDs with bigger wavelengths have a lower forward voltage?

Here’s a handy formula for determining the energy of a photon of a particular wavelength [3]:

Note how the energy increases as the wavelength decreases.

Putting this into the above table, we have:

This tells us how much energy an electron must lose in order to produce a photon of a given wavelength. Notice how the units are electron-Volts (eV), which is the charge of an electron times 1 Volt. You may be tempted to compare these values to the forward voltages you measured, but they’re not exactly comparable. Because of some other effects, the forward voltage of an LED multiplied by the charge of an electron is actually less than the photon energy! However, they should be at least proportional to the values you measured [4].

If you have a spectroscope or spectrometer, you can actually measure the wavelength of your LEDs! The spectroscope I used is an Eisco PH 0100QA (not affiliated with them), which are inexpensive and relatively accurate. You can usually find these for a few dollars on many physics or chemistry supply websites.

For the Eisco spectroscope, you look through the eyepiece and aim the tube so that the light you want to measure shines through the slit on the other end. You should see a bright spot on the right side of your field of view, where there’s a number scale. The peak wavelength is where the spot is the brightest. These spectroscopes usually work best in a slightly darkened (not totally dark) room, where you have just enough light to see the numbers.

Using my spectroscope, I measured the following wavelengths for my LEDs:

*I got this one off the datasheet so we have a basis for comparison, as Infrared is invisible to the naked eye, and the spectroscope doesn’t go that high anyways.

When you relate wavelength to LED forward voltage, you get this nice-looking graph:

Unlike lasers, LEDs aren’t terribly precise. Their wavelengths can move around quite a bit depending on temperature and current (which is probably just heating up the LED). This is because higher temperatures cause the LED’s band gap to grow narrower, decreasing the energy of emitted photons [5]. 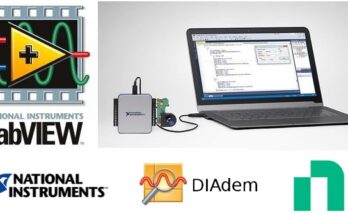 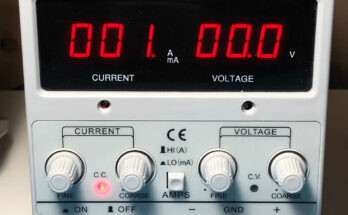 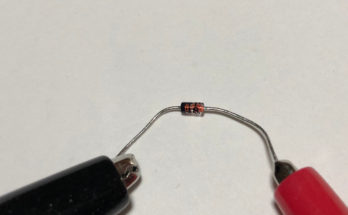