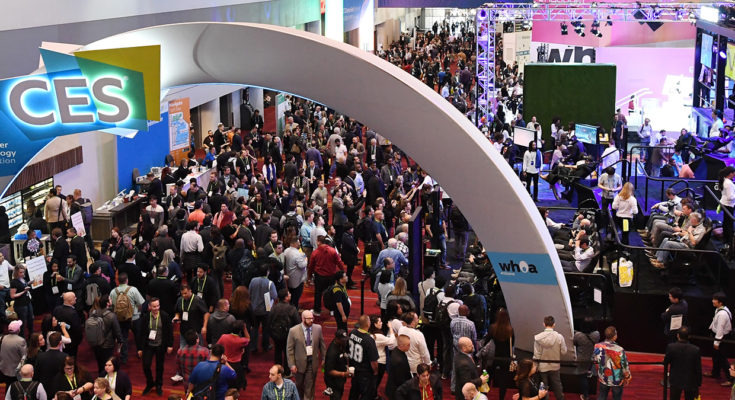 CES 2018 is the place to reveal the latest revolutionary gadgets, global trends, and progressive advances in the electronic technology that changes our everyday lives. In the show, many new technologies were showcased along with many new applications, like wearables, IoT (Internet of Things), Automotive, Virtual Reality, Home Automation, Mobile, appliance, healthcare, robots, mobile, PC and personal cybersecurity. Some technologies are not new but much improved to offer completely new user experience, like voice control at home as well as wireless that is not only part of every product’s design, but also reveals itself throughout the show going wireless eventually. Many people observed the biggest changes for every year’s CES and recognized CES 2018 is the year of A.I. and conversational interface – voice control.

The annual CES is becoming a stimulus to drive consumer electronics advance and it provides a stage to showcase how our everyday lives look and lead our consuming trend. Like all its previous events, many questions have been left for the product design folks. Can my new voice control do exactly what I want it to do? Can my smart door lock track my family members’ presence at home? How can my new oven cook for me? Knowing how people expect and what to expect make the companies move forward. With thousands of companies showcasing their technological progress at the CES 2018, we can be easily lost in the searching of the best by ourselves. Instead we can get an idea through the following categorized list of the best picked by others.

In the past years, autonomous cars have utilized the sensors assembly in the like of a spinning bucket that is mounted on the top of the roof. Now, the bulky spinning sensor assembly has given way to the laser type of sensors called lidar. Lidar is made of laser sensors that are cheap, reliable and small. Lidar is term for Light Detection And Ranging, a remote sensing and survey technology. The original lidar design by Velodyne consists of 64 laser diodes that rotate full 360 degree circle to form a 3-dimensional image of the surrounding environment of the car by the reflected laser beams. Many new passenger cars have used mechanisms to avoid collision or engage automatic braking. Lidar is among the latest technology developments. Since its debut, Lidar has been used to enhance automatic speed-changing cruise control, lane-changing assistance, parking assistance and blind spot detection. Lidar has advantages over traditional cameras. For example, a camera can be blocked and loses its focus which renders its useless. But the lidar can be supplied more power so that it’s ensured that the light can reach the target. Also, the lidar can measure the distance precisely so that it’s practical to measure at least 4 or 5 car s ahead to allow longer braking distance. As the Lidar technology advances, the price is going down significantly. A 16-laser lidar by Velodyne may cost as much as $4,000, but a solid-state lidar by a startup just costs as low as $100. Also, different lidar may work very differently from others to offer new applications and capabilities. In modern self-driving vehicles, lidars are one of the core modules for controls, which has the cameras to identify vehicles, signs and traffic lights, regular radars to detect the distance and lidars to take high-resolution 3D imaging. Unlike the cameras and automotive radars which have been long developed, the R&D in lidar is just started. As an example, LeddarTech’s LeddarCore system-on-a-chip is one of the latest solid-state lidars that is an ideal module for low to medium range applications and will be in production in 2019.

Toyota has installed eight Luminar lidars on its latest self-driving car Platform 3.0 that is built on a Lexus LS 600hL. The eight lidars can detect 360 degrees with a radius of more than 200 yards. Four of the eight lidars are high-resolution scanning heads that can detect objects in daylight or even in dark. The other four lidars are short-range type of lidars that are mounted on all four sides.

Smart Home is a seamless integration of various home automation solutions including lighting control, access control, climate control, entertainment, security system and energy efficiency monitoring. The core technology of Smart Home concept is big-screen Ultra-HD TV displays and wireless connectivity to various devices and interfaces. CES 2018 is not short of surprise about this trend. Today smart home products have been talked everywhere. Examples of these products include LED bulbs, home security, security cameras, smart locks, thermostats, smart plugs and switches, leak detectors, robot vacuums, Amazon Alexa or Google Assistant compatible gadgets, etc. Nowadays, one of the best features of smart home products is the capability of connecting to the Internet. All the above products can be connected to the Internet vis home Wi-Fi systems. Image you are not home and you use the app on your phone to connect to your home, and you can check food reserve in your refrigerator, or start cooking before you come home in thirty minutes. CES2018 was a big stage for showing the best of smart home products.

Sengled Element Color Plus LED is a smart bulb that can be commanded with both Amazon Alexa and Google Assistant.

Whirlpool’s Internet connected microwave has a touchscreen controls and works with both the Amazon Alexa and Google Assistant.

Partnered with Walmart, the smart lock manufacturer August has demonstrated its in-home delivery service, August Access. Now one of the same day delivery startup company Deliv has begun it work with many retailers on the market.

Home security company Brinks showcased its smart lock. The cloud-connected Array Smart Deadbolt has Wi-Fi, Amazon Alexa and 100 guest e-codes capability. The lock is powered by a rechargeable Li-Polymer battery and has a backup solar panel that harvest ambient light to charge the lock. The smart deadbolt incorporates traditional keys, a backlit keypad and the Array app for iOS or Android devices.

CES 2018 showcased a lot of new gadgets and tech trends with big focus on Artificial Intelligence, IoT and self-driving vehicles. For AR (Augmented Reality) and VR (Virtual Reality) industry, 2018 is  still a turnaround year in developing some of its fundamental technologies, such as 360 degree video technology, standalone headsets and haptic technology. As one of the biggest surprise in VR trend, HTC Vive headset show the promise of technology breakthrough. HTC Vive Pro headset employs dual 3.5 inch high resolution AMOLED displays that boost the resolution by 78% to enhance the feel of reality and experience of scene immersion. It also has a high definition 3D audio system that further enhances the experience. Before you take on this wonderful HTC Vive Pro Headset, we can take a close look on it.

L’Oreal is a giant in beauty industry and now it enters the wearable market to campaign its high tech skin protection products. In CES 2018 L’Oreal  showcased it new generation wearable UV sensor that can help keep you from UV in the sun. As it’s continues shrinking in size, now the sensor can be packed into a patch that is so small that it can be placed on the thumbnail. As you prefer, the sensor can be put anywhere that is convenient to you, such as on the sunglass or on your shoulder. The sensor continues monitoring the UV level around you and save it back to the app on your smartphone. The L’Oreal UV sensor boast a miniature size of 9mm wide and smaller than 2mm thick. The gadget is said to cost $50 when it’s in the market in 2019.

My Special Aflac Duck brought home the Best of CES 2018 Award for the Best Unexpected Product. It was recognized as the winner of “Tech for a Better World” CES Innovation Award and the HIS Markit Innovation Award for Robotics and Drones. Aflac, a voluntary insurance company demonstrated this new social robot that was designed to help children fighting cancer. Sproutel, a research and development workshop created this smart companion for children, which is part of Aflac Childhood Cancer Campaign. The Best of CES 2018 awards celebrate the innovation and creative products on the show by more than 3900 exhibitors every year.

Wi-Fiber’s Integrated Streetlights won the Best in Show award in the Smart City category at CES 2018. Wi-Fiber has long committed to its concepts of Illuminated and Interconnected Samrt Cities. Wi-Fiber launched a modular streetlight with many promising possibilities, which include smarting lighting, municipal Wi-Fi and even emergency state indication. The company that makes Wi-Fiber hopes this technology can be used to transfer many cities to having not only the cutting-edge wireless technology, but also an interconnected smart surveillance network. With their successful experience of deploying gigabit capable Wi-Fi networks, Wi-Fiber is focus on building the smart cities with a modular all-in-one intelligent solution. Wi-Fiber announced their new Intelli-Station that can be put on existing streetlight poles and it takes no longer than 30 minutes to connect to power lines and activates itself. The Intelli-Station module offers multi-functions like point to zoom, nigh vision, motion sense and Infrared capabilities by including LED lighting with strobe and color-changing functions, variable DB microphones, speakers, 4K cameras with facial and license plate recognition. It even can detect gunshot and issue an emergency state. The module has IoT, 2/5G, LTE, Wi-Fi and LTE connectivity. Intelli-Station can incorporate unified sensors to link air quality sensors, gunshot sensors and any IoT ready device through the integrated Zigbee control module. The design of the module reflects the very concept of modular to allow new added components without replacing the entire unit. This single module offers lighting, communications and surveillance functionality together.

Wireless sensors for industrial, agricultural and environmental applications have taken a big stride recently due to the advantages of no limit to space, location and maintenance. The major constraints of deploying more and more wireless sensors or adding more end nodes to the existing wireless sensor networks (WSN) are the power distribution and power consumption. Typically, these wireless sensors are powered by batteries. Normally, these batteries can last anywhere from several weeks to at most several years depending on the pattern of power use of each individual end node. At the point of changing batteries, the cost of maintenance significantly increases. Therefore, it’s highly desired to increase the battery life of the wireless sensor nodes. This leads to two different approaches, one is to optimize the sensor node operation mode to reduce the power consumption by duty cycling for example, and the other approach is to replenish power to charge the batteries with energy harvesting technology to collect stray energy from the ambient environment. Many companies have invest to study in energy harvesting technology. Matrix Industries, a Silicon Valley tech company pioneered in material science, has committed to reinventing the power equation for IoT and wearables. The Matrix team is made of experts in thermoelectric material science, thermal engineering, and consumer product development and manufacturing. At the CES 2018, Matrix showcased its two smart watches, the PowerWatch and PowerWatch X, which don’t need batteries to work.  The watches collect the body heat at the wrist to generate power. Body heat electricity generation is not w newly invented technology. This has been around for a while along with others, such as ambient light, vibration and  RF. The PowerWatch utilizes a thermocouple to collect the thermal energy that is driven by the difference between he body and the device. Matrix also makes the Energy Harvesting Sensor Beacon that can eliminate the need of batteries for the thousands of IoT sensors.