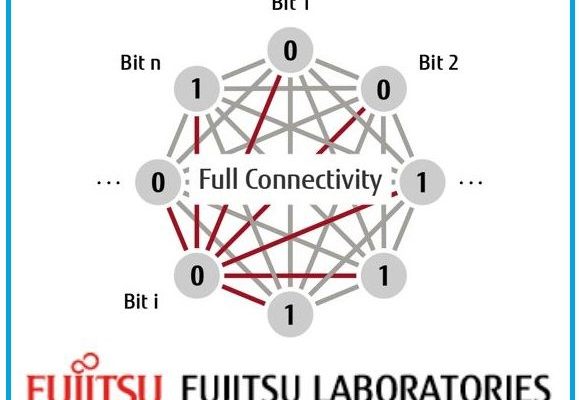 In Quantum Mechanics, QA (Quantum Annealing) is a metaheuristic for solving the optimization problem to find the global minimum of a given function with a set of possible solutions (quantum states). As a metaheuristic, QA is different from other approaches, such as optimization algorithms and iterative methods, which are dedicated to a globally optimal solution for certain problems. Instead, metaheuristic can usually find good candidates for potential solutions with much ease compared to other methods by searching through a large set of possible solutions to the combinatorial optimization problems. Quantum Annealing (QA) utilizes the Quantum Mechanics concept, superposition that refers to the simultaneous existence of two different states, 0 and 1. The quantum mechanical superposition phenomenon embraces the concept of “quantum bits” or “qubits” and is the basis of many types of quantum computations. Fujitsu QA emulates qubits by using a digital circuit design and processing the candidate solutions with help of Heisenberg’s uncertainty principle describing quantum fluctuation that indicates minute amount of energy change at a point for very short time periods.

To demonstrate the capabilities of DA architecture, Fujitsu introduced the application of DA to one of the combinatorial optimization problems, maximizing the performance of magnetic devices for renewable energy harvesting designs. Fujitsu DA algorithm allows nearly instantaneous calculation of the optimal arrangement of multiple planar (2D) magnets to maximize the strength of the magnetic field in an energy harvesting device. Many energy harvesters based on magnetic field consist of many small magnets that create a combined large magnetic flux for highest power generation. For example, in a energy harvesting system for collecting vibrational energy and convert it to electrical power, the principle of induction is utilized to generate electricity from the interactions between the permanent magnet and closed coils. To maximize the efficiency of power generation, the magnetic flux density must be optimal based on the arrangement of the many small magnets and the relative position of the coil.

Considering the non-linearity of physical phenomena in electromagnetic field, the arrangement of many magnets in a 2D space is a complex problem. To show how complicated this optimal solution search problem is, let’s consider the number of arrangements of 10 x 10 magnets along a 3D coordinate axis. The total number of possible arrangements is more than 1077. With Fujitsu’s DA method, solving such a complex problem only takes a few seconds. Then it is estimated to improve the magnetic flux density by 17% by using the resulting array calculated by DA and the efficiency of the energy harvester can be improved by 16%.

Fujitsu has envisioned a rapid growth in applying DA to many areas because of advantages of this technology, such as it’s timesaving, it does not require an ultra-low temperature environment and it does not require programming. Fujitsu plans to include DA technology in 2020 in its professional services for development of energy harvesting.