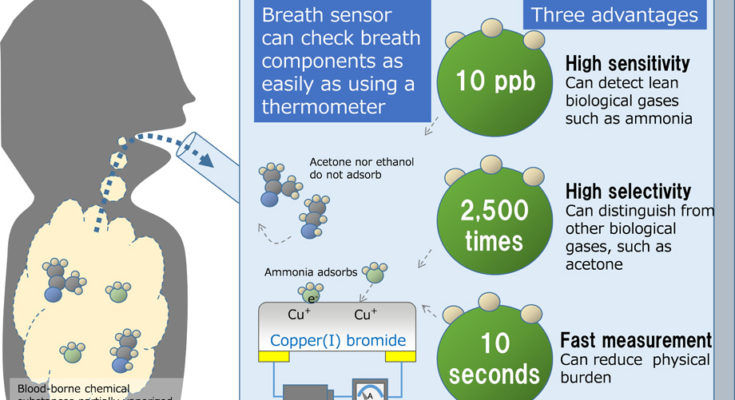 Fujitsu Laboratories has developed a portable breath sensor device that can quickly extract and analyze the targeted gas components, like ammonia in people’s breath to possibly detect some lifestyle diseases. Ammonia is normally at low concentration in our breath and have been considered as being correlated with lifestyle diseases. The portable breath sensor (also called odor sensor) developed by Fujitsu provided an easy way to identify the ammonia molecules that could be only identified by large expensive analytic instruments. The small dimension of the breath sensor makes it possible to use it as a daily thermometer screening. The low cost, ease of use, being non-invasive and targeted specific test will improve the successful early detection of lifestyle diseases and help more people.

It’s believed that lifestyle diseases, such as high blood pressure, diabetes and cancer may have correlations with people’s breath components. Many methods have been proposed to analyze people’s breath to examine the concentrations of specific gas components to indicate the body conditions of the person being examined. The gas components of people’s breath make a mixture of gases with similar chemical characteristics as shown below.

There are many gas components in a person’s breath with very small concentrations. These gas components with tiny concentrations are closely associated with the body conditions and diseases. The chemical substances from all body organs enter the blood and eventually evaporate in the lungs then exhaled out of the body. Capturing of the specific gas components of breath can be used as an effective indication to determine some lifestyle diseases. Studies show that ammonia concentration is correlated with liver metabolism and Helicobacter pylori (H. pylori) infection, which are combined as risk factor for stomach cancer.

There are usually two methods of analyzing breath components. The first method is to use large expensive analysis instruments, such as gas chromatography. The method is costly, and the equipment is big, and it requires a trained operator. It usually takes hours to have the results.

The second method id to use an electronic nose that consists of many gas sensors to analyze the differences in the response patterns between the breaths of different people. The test results can be produced very quickly, and it is portable, but this method cannot isolate the target gas from other gas components, which means its performance to indicate the body health is not enough.

Fujitsu Laboratories developed this breath sensor by applying the ammonia absorbing characteristic of copper (I) bromide films, which measures the very tiny amount of ammonia in people’s breath at a sensitivity differential 2500 times that for other gases.

The copper ions in the compound of copper(I) bromide that is a P-type semiconductor absorb ammonia molecules and the adsorption process is reversible to make the device reusable. Since the film demonstrates P-type characteristics, the electron supply from the ammonia molecules reduces the concentration of the P-type carries and that results in an increased resistance between the electrode. Fujitsu Laboratories utilizes this phenomenon and quantifies the change in resistance in accordance to the amount of ammonia molecules adsorbed. The report shows the sensitivity differential is up to 2500 times that for acetone that is another gas component in the breath, thus effectively can isolate the ammonia from the rest of the gases and measure ammonia at a concentration level of only 10 ppb (parts per billion).

With the high sensitivity to isolate the ammonia molecules from other components, Fujitsu Laboratories can develop an algorithm that can quantify the ammonia concentration as a function of the increase of the resistance of the electrode. The result of calculation requires only an approximately 10 seconds of exhalation, which makes the sensor easy to use and quick to generate the result.

Fujitsu Laboratories has planned to continue developing this technology by increasing the type of gases it can detect starting with acetone for other type of lifestyle diseases. Fujitsu also has planned to incorporate the breath sensors into smart devices (such as smartphones) and wearable devices, and to make breath component gas analysis as easy to use as a thermometer.

Also, to make this technology a useful method of screening for early detection of lifestyle diseases, Fujitsu Laboratories aims to conduct joint research with medical institutions to test the biological and medical results of breath analysis. The company hopes to create a technology that can examine breath components before a person needs to be admitted to a hospital and that is as easy as a thermometer, with the goal of a practical implementation in 2018.